Welcome to the advanced strategies section of Pyro TD. This guide will help you deal with pros. Note that I will not be crediting the people who came up with these. If you ask around, you can probably find out and in some cases, it was probably independent between multiple people. I’m sorry for not giving credit where credit is due, but I would miss most of them just because of ignorance.

Quick Damage “aka rushing”
If you want to put pressure on the other team, it’s really simple. Get 1 or 2 people to spam rank 1 weapon smiths all over the map. It’s a good boost in damage and can seriously catch people off guard.

There is a spot where you can build a Slow Rule Breaker that allows you to hit units on the way forward and on the way back. It does require some skill and you have to be used to “S” so you can stop the Rule Breaker. It also requires having whoever is on priest, to not heal the units that are missed on the first pass. The best players can hit all 10 units.

This tactic is simple, bait “anti-mage” which costs 250 gold then sell your mage for an archer. You lose 40 gold, the other team loses 250. If you built 2 mages to really bait it, you instead lose 80 gold, but much less than the other team. 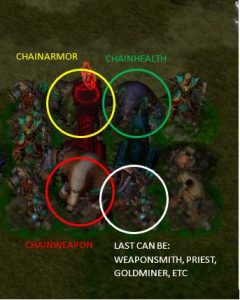 Let’s be honest, how many evolutions can you micro before there is just too much overlap? My guess is 3, but I bet some people might be able to handle 4. For most of us, it’s 3. Build your ranged evolutions in the back. I primarily use them for stunning so having reduced stats “½ as much” isn’t that big of a deal. Also, their hit point cap is set at 3k, so when you’re getting 5-6k on the front evolutions, you can still cap out their hit points with just 1 pass.

I’m going to repeat this again. The team that works together has an advantage, but the team that builds together wins. The team with the most “solo” players is going to lose if all other things given are equal.