Area of Effect
If your team decides to go aoe you will want to cover a number of roles.  These roles consist of “Mass Healer”, “Single Healer”, “Damage”, “Armor”, and “Froster” (aka clumping the units).  More than 1 person can have the same job and the same job can be split up between players.  As long as the roles are coordinated, you should be fine. 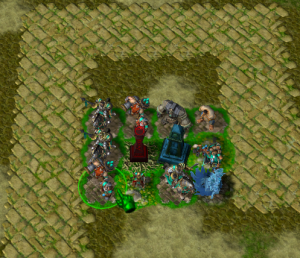 Just like in the single target guide.  Generally the team that builds together, beats the team that doesn’t.  This is because sharing auras saves your team a lot of gold.  The team that doesn’t build together has to spend extra gold on more auras that have already been built by someone else.  If they had just built together, they would have both benefited from the aura that was built.

You are going to want to upgrade your footmen into better units.  When going AOE, it’s extremely easy to get 10 evolutions.  Just make sure you have a unit to tank and a Raider to increase the attack speed of all of your units.  A good strategy is to make 8 ranged units that will have low hit points and really high attack while you have the other two to serve as your tanks.  You will need to ensure your two front line units have a lot of hit points.

AOE is fun and generally works very well vs casuals when done right.  It is outright overpowered vs those who don’t know how to counter it.  That being said, vs pros you will almost always lose if you go AOE.  It is very easy for pros to counter and if you don’t win quick enough, you will be facing a team that has 3+ evos with 5k+ hit points.  Your evos aren’t likely to have even 1k hit points and you’re only likely to have 1 or 2 evos with more than 1k.  If you realize you are up against AOE, you need evo quickly.  A captain with high block and hit points and a mage with high damage will make short work of most AOE armies.  Other methods of countering AOE just comes with practice.  For example, learning to drop a ton of rank 1 weaponsmiths just to get a really quick damage boost on say your mage and captain.